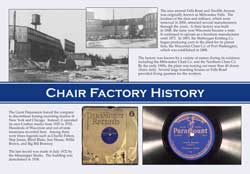 Located at the corner of 12th Avenue and Falls Road.

The area around Falls Road and Twelfth Avenue was originally known as Milwaukee Falls. The location of the dam and millrace, which were removed in 2000, attracted several manufacturers through the years. A chair factory was built in 1848, the same year Wisconsin became a state. It continued to operate as a furniture manufacturer until 1873. In 1893, the Sheboygan Knitting Company began producing yarn in the plant for its parent firm, the Wisconsin Chair Company of Port Washington, which was established in 1888.

The factory was known by a variety of names during its existence, including the Milwaukee Chair Company and the Northern Chair Company. By the early 1900s, the plant was turning out more than 40 dozen chairs daily. Several large boarding houses on Falls Road provided living quarters for the workers.

On December 14, 1916, the Wisconsin Chair Company founded the New York Recording Laboratories and began restructuring the factory to manufacture 78-rpm records for use on phonographs the company also produced. The first record made in Grafton was created from a New York City studio master on June 19, 1917. The New York Recording Labs continued operations until 1932, with more than 100 employees working it is record-pressing and shipping facilities. Records were produced for the Wisconsin Chair Company’s Paramount, Puritan, Broadway and Famous labels as well as dozens of other labels for national retailers.

The Great Depression forced the company to discontinue leasing recording studios in New York and Chicago. Instead, it operated its own Grafton studio from 1929 to 1932. Hundreds of Wisconsin and out-of-state musicians recorded here. Among them were blues legends such as Charlie Patton, Skip James, Blind Blake, Son House, Willie Brown and Big Bill Broonzy.

The last record was made in July 1932 by the Mississippi Sheiks. The building was demolished in 1938. 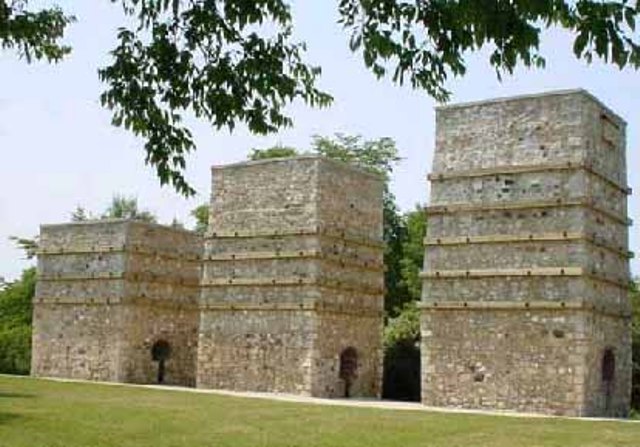 Located at the south end of the Village at 2020 South Green Bay Road.

This urban park, located in downtown Grafton, is host to an array of community activities throughout the year. It can also be reserved by non-profit Grafton community service clubs, organizations, youth groups, and businesses located in the Village of Grafton.